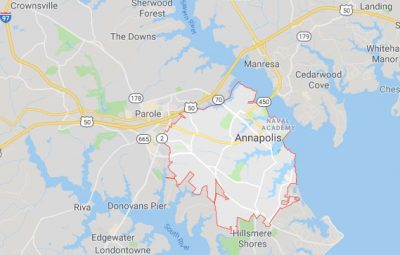 Annapolis Situated on the Chesapeake Bay at the mouth of the Severn River, Annapolis is the capital of Maryland and the county seat of Anne Arundel County. Annapolis is truly a cultural mecca—boasting rich maritime and government history, African American history as well as charming colonial heritage; and, more recently, a thriving art scene and delectable dining. The Chesapeake Bay is the nation’s largest estuary system, and a very important feature for the ecology and economy of Maryland. A combination of salt and fresh water, called brackish, and winding marshes and forests provide diverse habitat that sustains 2,700 species of plants and animals, including migrating birds. Historically, the Bay’s sunny bottom is home to submerged grasses that provide food and habitat for fish, crabs and waterfowl, and add oxygen to the water and improve water clarity. Annapolis provides access not only to the Chesapeake Bay, but also exploration opportunities to the network of rivers, creeks and inland bays that make up this great estuary. Brief History When originally settled by the Puritans, Annapolis was named “Providence”. It was later called “Anne Arundel’s Towne” after the wife of Lord Baltimore. In 1708, as Queen Anne, she chartered it as a city. The Annapolis flag is created from her royal badge, a crown over the entwined thistle of Scotland and Tudor rose of England; it reads “vixi liber at moriar” meaning “I have lived, and I shall die, Free”. Downtown Annapolis holds the distinction of once being the nation’s capital city, when the Treaty of Paris, ending the Revolutionary War, was signed here. The Maryland State House, where George Washington resigned his commission as General of the Continental Army in 1783, towers over the city at the top of State Circle. The same State House, the oldest in continuous legislative use in the United States, is still bustling when the Maryland General Assembly meets in its chambers. Each year, numerous State functions are hosted here and the Governor and Lieutenant Governor both keep offices in the building. Today, Annapolis has more original 18th century structures standing than any other city in the United States, many of which are open to the public. All four Maryland signers of the Declaration of Independence had impressive homes in Annapolis that have been lovingly preserved. “Naptown” is influenced by military and collegiate traditions due to being home to two prominent academic institutions. For many, Annapolis is synonymous with the United States Naval Academy, which was founded in 1845. From Commissioning Week to home sporting events, including Navy Football, Midshipmen can often be seen in dress whites about town. The Naval Academy is open to the public for touring and provides fantastic views across the water to Eastport and out to the Bay. Annapolis has the honor of hosting another highly distinguished college, St. John’s College, founded in 1696 as King William’s School. It is the third oldest college in the United States (after Harvard and William and Mary). Annapolis in the 1800s was home to about 400 free African American people. There are several sites and buildings about town that have been preserved to show the important history surrounding African American life in Annapolis. The Kunta Kinte-Alex Haley Memorial, located at the City dock, the Maynard-Burgess House, across from City Hall, and William H. Butler House at 148 Duke of Gloucester Street are just a few of the tributes to a vision of racial healing. Annapolis Today Annapolis harbor sits at the end of Main Street, where sailboats cruise by as they come and go from the Chesapeake Bay. Known for its’ significant maritime history, Annapolis is “America’s Sailing Capital,” and is beloved by boating enthusiasts and renowned for its annual boat shows at the city’s docks. For Great Loop sailors, Annapolis is a popular stop-over in the early summer. A short stroll or water-taxi ride across Spa Creek brings you to the neighborhood of Eastport, with art galleries, restaurants, and the Annapolis Maritime Museum. Each year an annual tug of war occurs between downtown Annapolis and Eastport stretching across Spa Creek! Enjoy a leisurely stroll throughout Annapolis and you will experience how vital the waterfront has been to this city’s history. See more at the City of Annapolis visitors’ website.